Swagger allows you to describe the structure of your APIs so that machines can read them. The ability of APIs to describe their own structure is the root of all awesomeness in Swagger. Why is it so great? Well, by reading your API’s structure, we can automatically build beautiful and interactive API documentation. We can also automatically generate client libraries for your API in many languages and explore other possibilities like automated testing.

Swagger does not only allows you to do API documentation but you can also authorize each endpoint in the swagger doc. In this tutorial, I use JWT to authenticate and pass the token to the "api_key" field which gives you access to protected resources.

If you're not familiar with swagger, you should try checking out their website http://swagger.io/

To authenticate your swagger using jwt tokens, you have to start by installing the swashbuckle NuGet package

After installing the package, a SwaggerConfig file would be generated in the App_Start folder. The best way to get started using swagger dashboard quickly is to add comments to your API controller method. To add comments, start typing a triple forward slash above the method and visual studio would generate something like what is listed below: 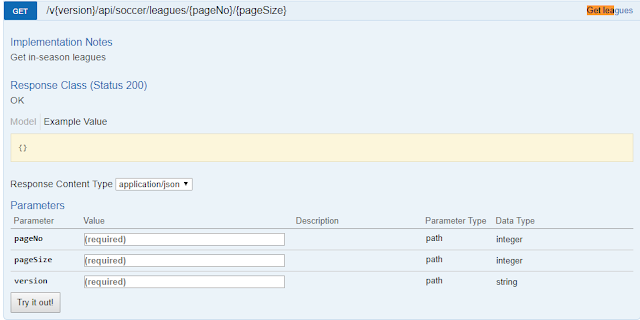 Adding comment would help to give more meaning to the swagger endpoints in the dashboard.


Adding authorization is a simple process, you just have to make modification the the SwaggerConfig file in the App_Data folder by adding:


Then you can pass the token returned during authentication to the "API key" box in the dashboard and click on the Explore button. It would give you access to resources that require authorization.

If you haven't done anything on JWT before, you can check my previous post where i discussed about JWT authentication in asp.net web api.

Popular posts from this blog

- March 20, 2017
Jwt in Asp.Net Web API And MVC Introduction Token based security is trending everywhere in today’s security architecture. There are different token providers out there, but the one people are more familiar with is the JWT token. The token identifies a user. For example, your ID card could be used as a token. It identifies who you claim to be. The Id card would contain information like: ·         Firstname ·         Lastname ·         Age ·          Title The JSON Web Token The JSON Web Token contains some header information, a signature, and the token’s claims. In plain text, the claims might look like this: { "Name":"John doe", "UserId":5, "Email":"johndoe@gmail.com", "Role":"Boss" } The token header is used to specify some other things like signature algorithm, expiration date, the name of the issuer, and a few other attributes. Using Jwt In Asp.Net Web API The JwtAuthHandler cla
Read more

Implementing a payment gateway on your website in Node JS

Introduction Implementing a payment gateway on your website in the past was so difficult and expensive. Most programmers when it comes to implementing a payment gateway they begin to do some equations on their mind like costs, security, and implementation. And not all payment gateway supports international transactions which is why some projects cannot scale easily. A solution for you In the last few years, tons of payment gateway has been bombing the internet and they have helped to streamline the process of implementation, costs, and security. Here are few providers: Paystack Interswitch web pay Cash envoy I used  Paystack  in one of my project written in Node JS to build an API that can handle payments.  Paystack  already has an API  to work with payments. To sign up for a test account, create an account with  Paystack  to get your public and secret keys and they are not very expensive to use. When your ready to go live, then you can sign up for a live acco
Read more

- January 10, 2017
Introduction Happy new year folks. I hope you all enjoyed your holidays.  Let me enlighten you with some new year codes 😊. Remember my post on how to implement a payment gateway on Paystack with Node js ? today, you would see it in action in Asp.Net . I am not going to build a customer subscription app like I did in the previous one, rather I would provide explicit codes that can be used to implement payment on any mobile apps, web apps, and any platform indeed. It is a simple code and can be easily integrated into your projects. To know more about Paystack infrastructure, visit the developer's section on their website. They have already written some libraries on vast programming languages like Python , Java , Node js and so on... If you have problems working with the code or implementing it on your project, drop your comments and you might receive an email from me or if your company is looking forward to incorporating a payment solution, you can contact me. Diving t
Read more